Located in the busy shopping streets of Myeong-dong, this tourist attraction brings fun and comfort.

Here are the images and the direction on how to go to Trick World Museum.

Seoul Subway Line 4, Myeong-dong Station. Look for VIPS Steakhouse. The musem is in the B1 floor.

I went to Everland Caribbean Bay to peep on Korean girls in two piece bikinis, to enjoy the water and beat the South Korean Summer. Tagging my wife, sister-in-law and my daughter, we enjoyed the summer heat in one of the most popular tourist destinations in South Korea (and one of the places where radishes grow).

This water park features fun slides for everyone, kids, adults, with teeth or none. This water amusement park was designed with Caribbean theme, complete with pirate and pirate ships. The facilities are clean; in fact, you are not allowed to bring any food inside (unless you hid it in the most unsearchable part of your bag), because the food might contaminate the water, and that is reasonable right?

When you hear the sound of the horn of a big ship, expect to hear the excitement of locals because it signifies the arrival of a big wave on Caribbean Bay’s main pool. I do not know the science and engineering behind the artificial wave, but expect it to be fun and exciting, (a big ocean wave in a swimming pool? It is exciting right?)

Here are the images you might see and encounter if you want to visit this amazing theme park.
The theme park also offers, Spa and restaurants and shops for swimming paraphernalia.

About on getting there, hmmm, we are from Beomgye in Anyang, so we took the Bus No. 8839 to Everland.

The Bus Station is at the left side of Lotte Department Store in Beomgye Station Subway Line 4.

Photoblogged by Dash Dacian 4 comments:
Email ThisBlogThis!Share to TwitterShare to FacebookShare to Pinterest

Seoul Grand Park is the prison home of different types and species of animals from around the world. For the enjoyment of another animal called Human, animals were kept within a secured fence, cage, and aquarium. If you want to experience the taste of wildlife (as much as wildlife wants to have a taste of you) then Seoul Grand Park Zoo Area is the place to go.

With an entrance fee of KRW 3000 for adults, you may now have the privilege to show Mother Nature that you are at the top of the food chain (and at the bottom of the world called Hell).

There are various kinds of our fellow inhabitants and here are the images of some of them.


Elephants are not a local resident of South Korea, but Seoul Grand Park uses his connection and Gadam Money to import this magnificent animal for you to enjoy. 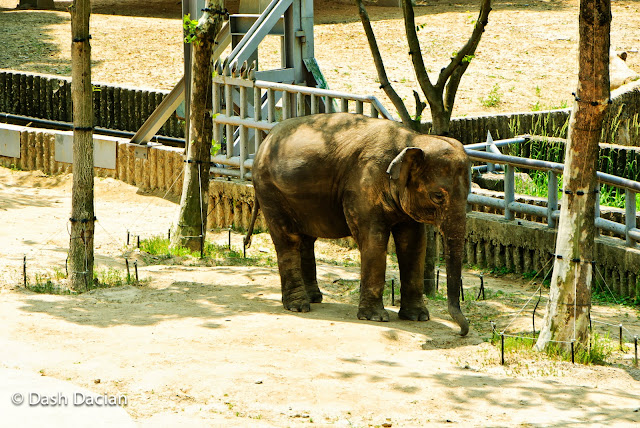 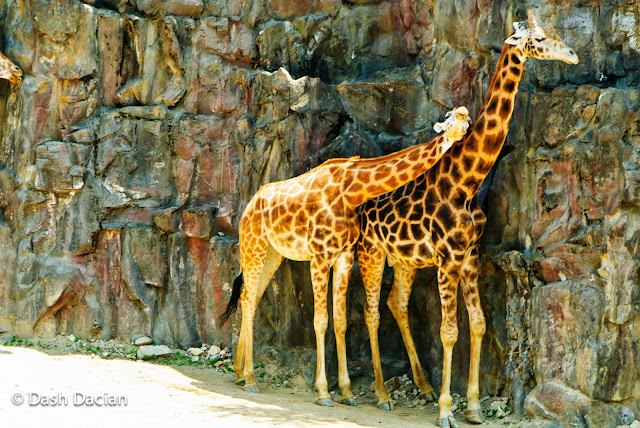 Giraffe 1: Damn dude so fucking hot out here. How long have you been working in Korea?

Giraffe 2: Been workin ‘ere for ten damn years, I say and still no increase of my gadam food supply.

Giraffe 1: Fuck, I should have applied in Busan Zoo instead; more water, and food supply plus they have a welfare bonus every year.

Philpo is a type of southeastern crocodile. His scientific name is Philippine Politician. Philpo is very good and nice especially during May and hunts its food by dancing Gangnam Style. They devour its prey leaving nothing and including the clothes you wear. This type of crocodile is the most dangerous type of crocodile because it always smiles and looks adorable leaving you clueless on what are its real intentions. 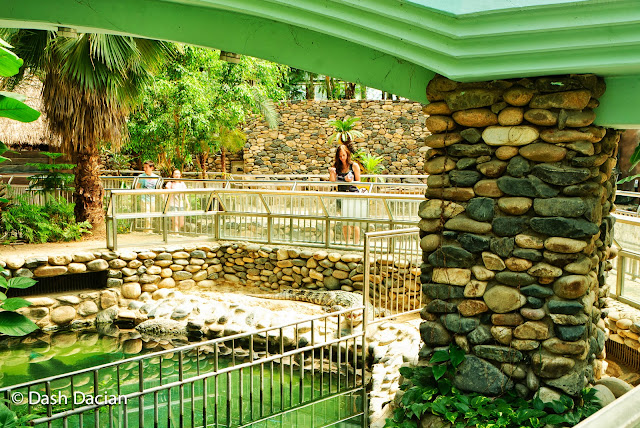 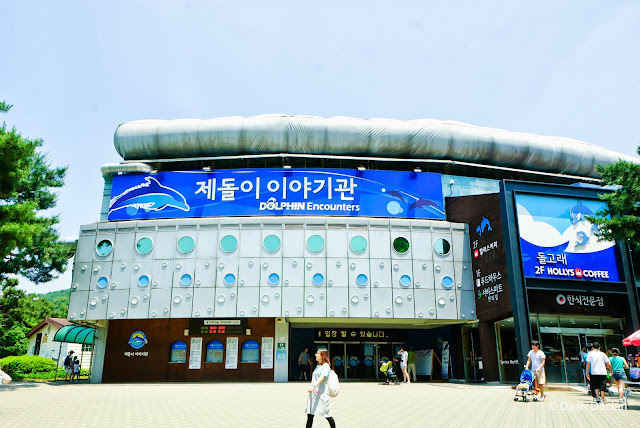 Dolphins are the second animal to view sex as an enjoyment and pastime (not just a mating ritual) next to an animal we called Humans.

But this dolphin show is no Sex Show. Here you will witness how dolphins will follow every command by its handler in exchange for a piece of sardine. 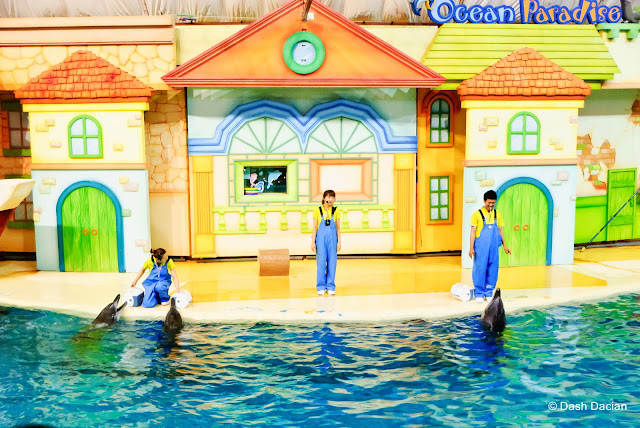 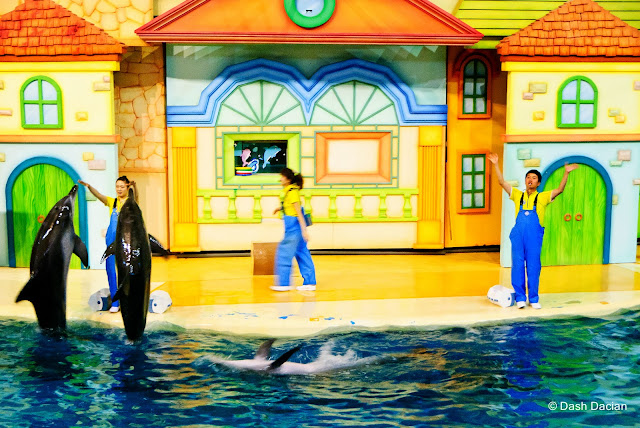 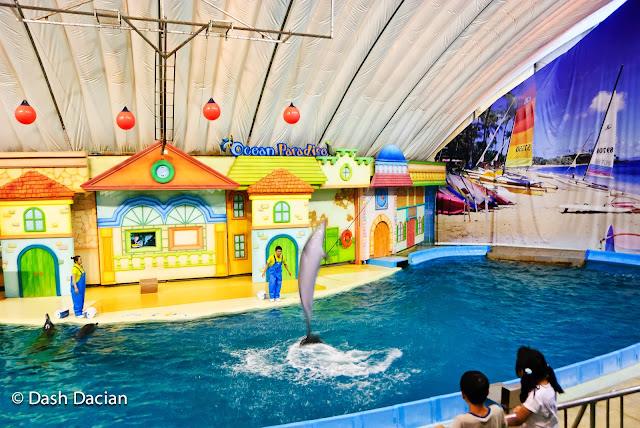 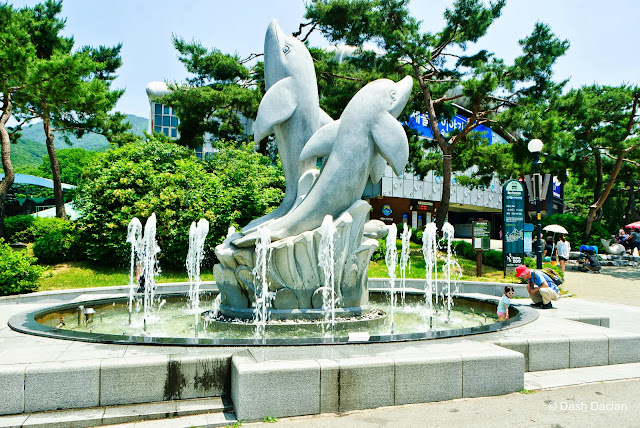 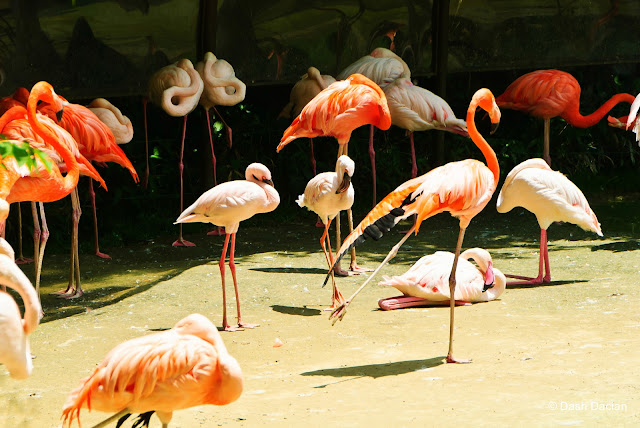 The popular pink bird is also available in Seoul Grand Park. Flamingos rest in one foot and they are actually comfortable with that. It is like riding the Seoul Subway during the rush hours. 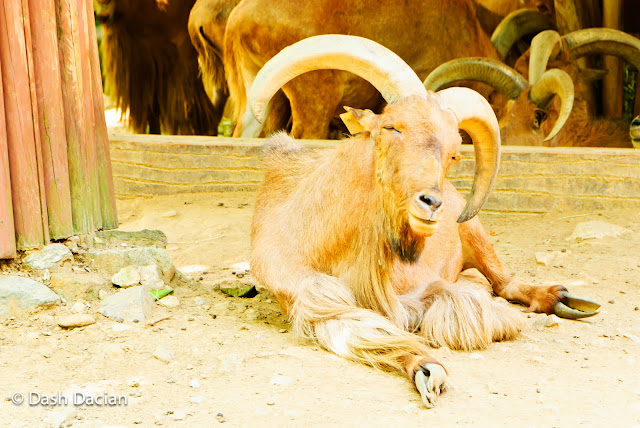 I forgot to list this goat’s name, because I was intimidated by the way he looks at me. It was the feeling of uneasiness like when I enter David’s Salon for a haircut. But I did try to ask his name but he only game me that look. So I said I'm sorry goat, just continue mating those females, I wont interfere. 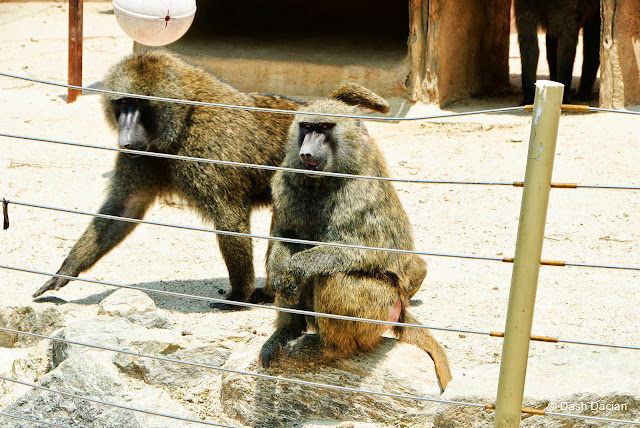 These orangutans baboons were waiting for the tourists to throw food. It was #throwfoodthursday in ape world. 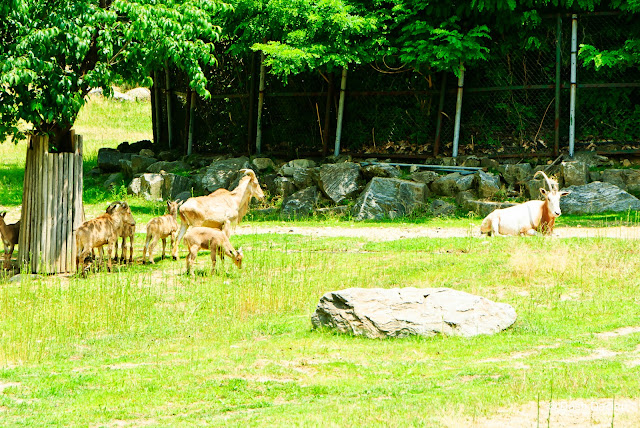 That husband was drunk, and the wifey goat is nagging about it. 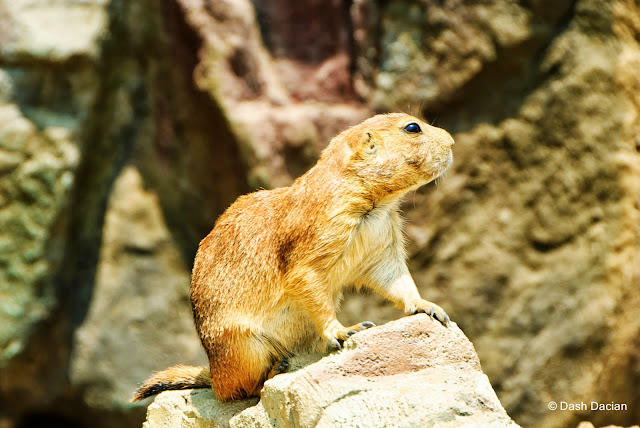 I was waiting for it to pray but I failed. 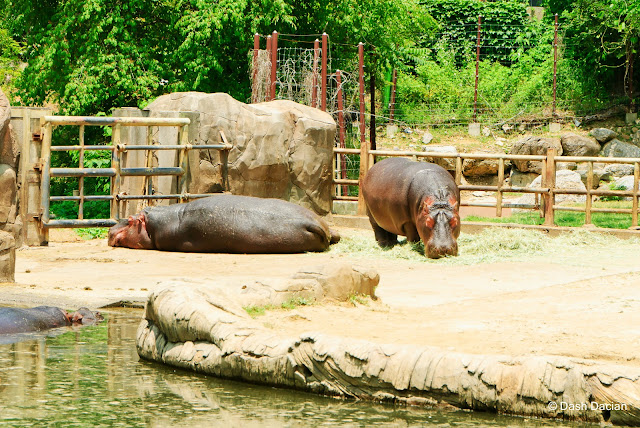 Hippos cause more deaths than crocodiles according to Mang Kanor. This territorial ball of pure fat can crash your bones in seconds. 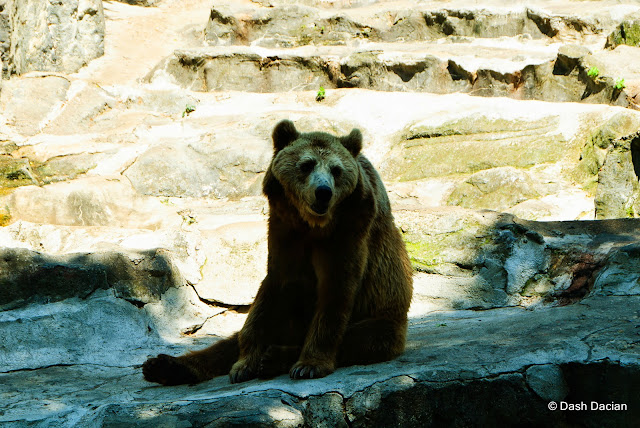 There are many types of bear. This one in the picture is called San Miguel. Other types are Budweiser, Colt 45 and Bear na Bear. Bisaya man mi, kaning ibidinsya. 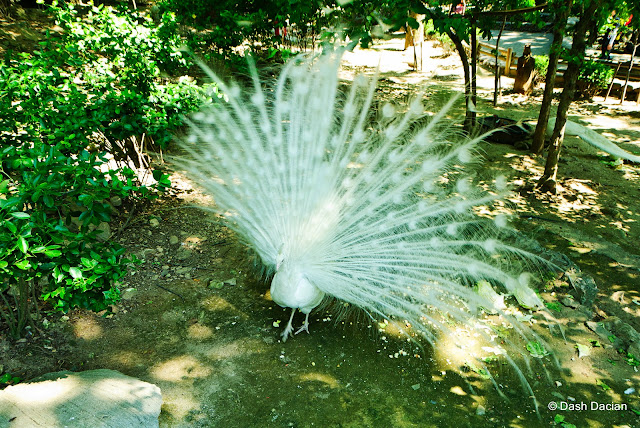 Peacocks are beautiful birds. This one is actually a male, he used to dance samba, in samba festival. 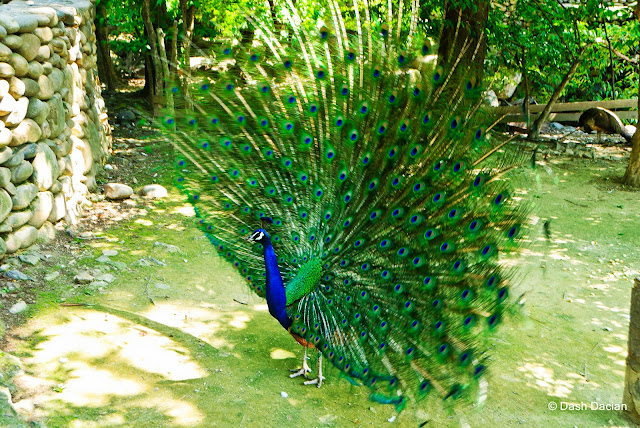 This is the green variation. It is also called Green2. 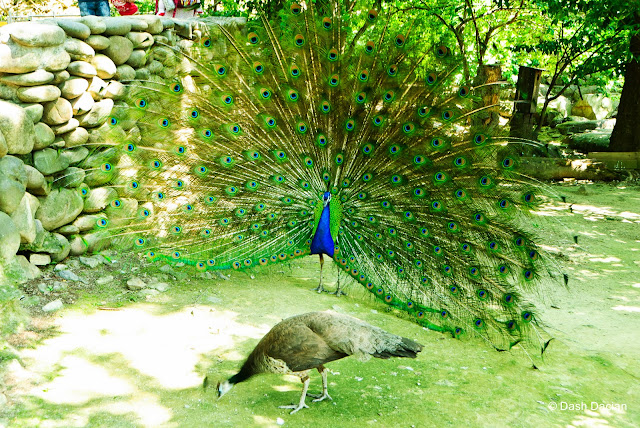 I was lucky to witness a courtship ritual in peacock world. But the female is not interested in this peacock. I don't know the reason but according to mr rooster he has pea sized cock. 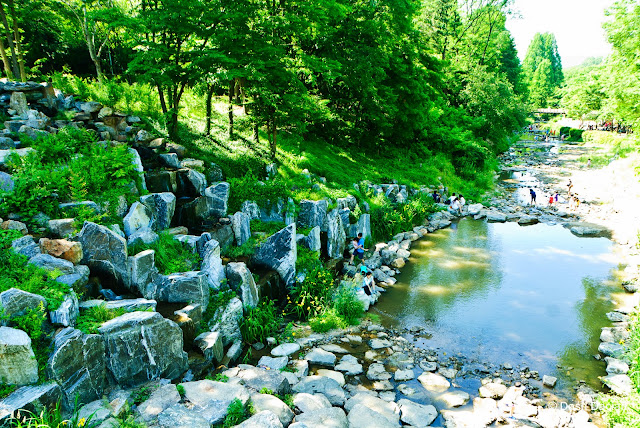 Seoul Grand Park is an enormous park featuring many animals, picnic grounds, hiking trails, lots of nice legs especially during summer. What are you waiting for, be eaten when the siberian tiger escapes from his cage